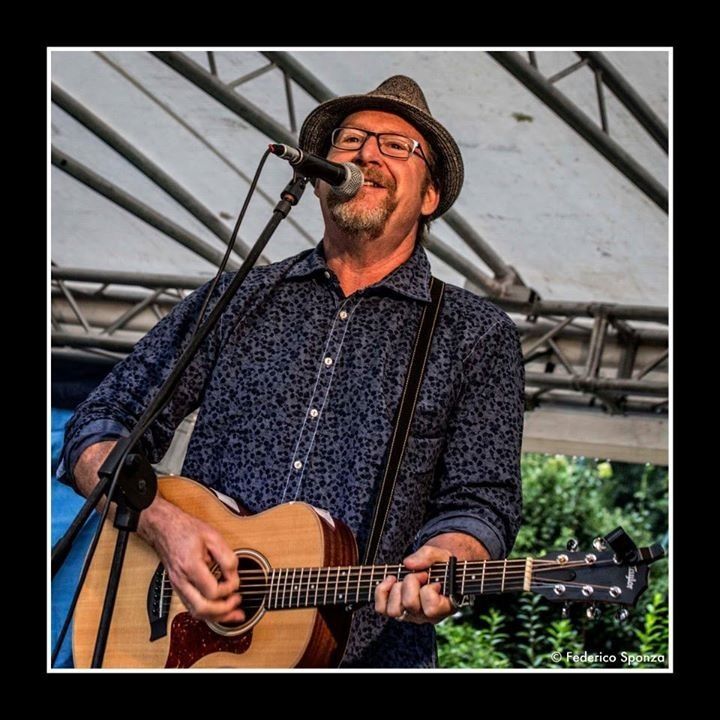 Tim Grimm is a bit of a Rennaisance man in the performing arts world. He has for the past 20 years, blended his love for songwriting, travel, and the storytelling of acting (theatre, film and television). His most recent recording- GONE, was released in March 2021 and debuted at #1 Folk album for the month. It's title song was released as a single in October, '20 and ended up the #1 most played song on Folk radio for the year. Here's one of the early reviews- that well sums up this essential recording-

From 2019-- HEART LAND AGAIN revisits a renowned collection of songs from 20 years ago.... A STRANGER IN THIS TIME (2017), In the Fall of 2016 he recorded the single- WOODY'S LANDLORD-- which was the #1 song on Folk Radio for the year. Tim's previous recording, THE TURNING POINT, produced the #1 song on Folk radio in 2014-- KING OF THE FOLKSINGERS. It was a particularly gratifying honor, given the song is a tribute to Tim's friend and musical icon, Ramblin' Jack Elliott. Tim's history with Ramblin' Jack goes back 30 years-- beginning with a bicycle ride that led to The Newport Folk Festival…. Tim contributing liner notes to Jack's Grammy winning album, The South Coast (1995)… Jack's recording Buffalo Skinners with Tim on Tim's album, Coyote's Dream (2003)….and now, most recently KING OF THE FOLKSINGERS.

After college (Earlham), Grimm pursed an MFA in Theatre at The University of Michigan and from there worked in Regional Theatre, settling in Chicago. In Chicago, in addition to his theatre work, he studied briefly at the Old Town School of Folk Music and began writing songs and performing. He put together a band, Tim Grimm and The True Hearts and released 2 cds--True Heart, Kind Mind and Broken Down Palace. At which point, "Hollywood called", and Tim put down his guitar and pen, and didn't really pick them up for close to 10 years.
After several years (1990s) working in Los Angeles (where he co-starred for 2 seasons on the NBC drama Reasonable Doubts, worked on Clear and Present Danger with Harrison Ford,  and appeared in several films and tv projects), Tim returned home to Indiana.  He grew up in the woods and small town settings of southern Indiana, son of schoolteachers and grandson of farmers, and his return home was a conscious choice to live a life of significance rather than one of “success’.  He lived for many years on 80 acres close to where he grew up. Tim’s songs are full of the rural rumblings that have shaped his life—rich with descriptive details, and sung with warmth and intimacy—recognizing the inextinguishable national romance with the idea of the family farm and the vanishing landscape of rural America.  He released the album, HEART LAND in 2000, and on the strength of that recording, was named 2000’s “BEST DISCOVERY in Roots/Americana Music” by The Chicago Sun-Times. His albums COYOTES DREAM and NAMES, led to his being named “2004 MALE ARTIST of The Year” by the Freeform American Roots DJs.
He has released 10 solo albums since 2000 (including the newest- THE TURNING POINT), and 2 collaborations- AMBER WAVES (with Jason Wilber) and WILDERNESS PLOTS.

In 2005, Grimm was asked to compose music and act in a production of THE GRAPES OF WRATH at Indiana Repertory Theatre and Syracuse Stage in New York. His song from the play--THE PEOPLES HIGHWAY, made it onto his next album, THE BACK FIELDS, which was subsequently named Americana Album of the Year by the Just Plain Folks Music Awards-- the world's largest independent music awards.
In 2007, Grimm put together a concept cd with several of the Midwest’s finest songwriter’s— Krista Detor, Carrie Newcomer, Tom Roznowski, and Michael White. The recording, Wilderness Plots, was drawn from the short stories of noted author, Scott Russell Sanders, and explored the settling of the American Wilderness in the Ohio River Valley Region between The Revolutionary War and The Civil War. Two PBS programs have explored Wilderness Plots-- the first, a documentary on the story and song, and the second a full Wilderness Plots- In Concert (2012). Produced by WTIU in Bloomington, IN, both productions were nominated for EMMY AWARDS. Tim continued to write songs based on Sander's writings and released the album, WILDERNESS SONGS AND BAD MAN BALLADS in 2011. Looking ahead to the Spring of 2018, the original cast of Wilderness Plots will reunite for a select few shows, and again be filmed by WTIU for PBS.

Tim has worked with Inishfree Tours for the past several years, bringing Americans (and Dutch and Germans !) to the Emerald Isle for 9 days and nights of music, and day trips exploring 3 select Counties. Guests who have travelled with Tim encouraged him to lead groups elsewhere, and this has led to the creation of Beyond The Tartan Tours of Scotland. Tim continues to be active in Regional Theatre as well-- most recently in the Bicentennial production for this home state- FINDING HOME: Indiana at 200, for which he wrote an album's worth of music, and appeared for 6 weeks onstage -- as actor/musician.
For a list of all available albums (at this time) please visit:
https://store.cdbaby.com/artist/timgrimm